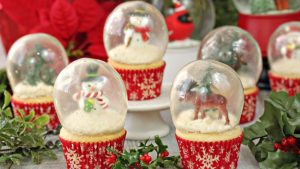 If you run a food network, you should make absolutely sure that the recipes you use during your daily broadcasts on TV or the Internet are pure originals or properly licensed. It turns out the Food Network may not have done that, as blogger Elizabeth LaBau from Sandy, Utah is suing for the copyright infringement of one of her popular dessert concoction in a California federal court. That dessert was the aptly-named snow globe cupcake.

While it might not be a big deal for the Food Network, cooking is a full-time promise of employment for LaBau and something she takes very seriously. It’s not okay to take something from her blog without providing due credit, especially when the recipe in question tripled her website’s income.

Although for now the lawsuit remains in the realm of mere allegation, it is worth noting that the video was added only three weeks after LaBau updated her own website with the tasty recipe.

One might initially believe that the snow globe cupcake recipe could have been accidentally duplicated, but that certainly isn’t the case once you see how the dessert is made. The snow globe portion of the cupcake is literally a dome that hangs over the cake-like portion, but everything is edible. The dome itself is made of a hardened gelatin.

Because the recipe is so unique, its popularity left her website down for a short period of time. She had a whopping 740,000 shares on Facebook alone–no easy feat.

LaBau says that it is that real-life competition that makes the job so difficult and time-consuming, and it was a major blow when such a major network pilfered her work. Her blog has won several awards in the years since the recipe was posted, but LaBau says it suffered substantially when the Food Network posted such a blatant rip-off of her snow globe dessert. Not only that, but when she contacted the network to discuss how they could choose to either remove their video or provide her with due credit, they ignored her request. It was only then that she moved forward with what turned out to be a $150,000 lawsuit.

Whether or not that lawsuit will fall in her favor is of course up for debate. We’ll know soon enough.