There was a recent copyright infringement lawsuit against Marvel filed by Horizon Comics. Their lawsuit claims there was a too much of a similarity in the poster of the popular movie Iron Man 3 from Marvel and Horizon’s Radix comic book cover. Both feature the titular hero kneeling in almost the exact same posture (see picture below). 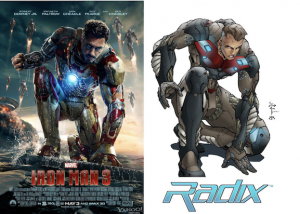 Marvel Entertainment was sued by Horizon Comics Production back in April 2016 when the third movie of the Iron Man series released. However, on Monday, July 15th, Marvel emerged as the standout winner in the lawsuit.

In their lawsuit, Horizon claimed that as many as six Marvel employees knew about the drawing of Caliban and the entire Radix series. They also claimed that two of the employees also had a working relationship with the creators of Radix, and it is their influence that brought about the Iron Man 3 poster into motion. But, according to J. Paul Oetken, the US district judge of New York, none of the six individuals had seen the sketch of Caliban or were involved in the design of the Iron Man 3 poster when it came out, hence ruling the case in favor of Marvel Entertainment.

J. Paul Oetken also wrote in his statement that Horizon Comics Production was not able to demonstrate any image that was strikingly similar to the Iron Man 3 poster. Although there were noteworthy similarities, they were not enough to judge the case in favor of Horizon. He also added that Horizon did not provide any proof of copying. On the other hand, Marvel came up with several pieces of evidence that proved the poster was an independent creation.

The judge in his ruling also wrote that Robert Downey Jr. featured in the photoshoot for the poster design of the movie. The photos clearly show the different postures and poses of Robert Downey Jr. crouching and kneeling from which one of those images was chosen for the poster. Since Horizon was unable to produce any distinct evidence as a rebuttal to Marvel, the court was not persuaded by their appeal to consider the similarities that exist in both the images. The news was a long time coming, especially after Horizon failed to deliver their shreds of evidence against Marvel’s business for allegedly copying the poster.