Swastika as a Trademark 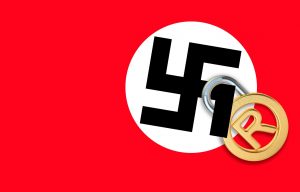 As is often the case regarding any sort of particular legal practice, the specifics behind intellectual property law and trademark law come with a bunch of snags that several people outside of the practice don’t necessarily consider. For example, there once was a man by the name of Steve Maynard who attempted to register the Swastika and the N-word as trademarks for a business group, Snowflake Enterprises, LLC. Recent changes to U.S. Trademark Act had found unconstitutional the provision that banned certain images or concepts to be trademarked based solely on whether or not they were considered “disparaging.” Maynard, a local of Alexandria, Virginia and one who claims he is “not at all” a racist by any stretch, stated he wanted to trademark the Swastika and the N-word – strikingly enough – to combat their use and marketability by white supremacists. He believed, by trademarking these specific symbols, he could curb the market on Swastika flags by artificially inflating the prices on them to the point that no one would want to buy one, or by reframing the use of the N-word in images that inspired conversation and debate rather than hateful rhetoric. And while many might consider this a noble act to counter certain social beliefs in America, Maynard – a one-time patent examiner – failed to account for a couple of major flaws in his plan.

For one, even despite apparently having the best of intentions, Maynard would have had to register the trademark of the Swastika under a slew of different categories for product use in order to secure the Swastika solely as the trademark of his company. This includes products as teeshirts, coffee mugs, flags, and whatever other sorts of paraphernalia one can consider slapping a prominent socially recognizable symbol upon. That is not to say that he couldn’t accomplish something like that for a variety of other potential trademarks. But, it certainly does provide a bit of a kink in his plan to market (or rather, take off the market) the Swastika.

The bigger and more hampering problem is actually the social perception the Swastika represents. While Maynard’s intent was to utilize it on the market in order to destabilize its availability, the Swastika as it is recognized within the public eye is hardly ever used as an actual marketing device. Rather, because of what the Swastika represents politically and socially, to use the symbol outside of Maynard’s attempt to trademark it for his own business would have proven futile. Because of its proven standing as a political and social symbol instead of being a symbol for commercial use (compared to, say, Apple’s “bitten apple” logo or Google’s rainbowesque G), to use it outside of how Maynard intended to market it would not have been considered infringing upon the commercial intent of  Snowflake Enterprises, LLC. Generally speaking, infringement of this sort is only committed when there is a substantial confusion caused in terms of who is marketing the product. Because the rainbow G associates so strongly with Google as a marketing device, for someone outside of Google to use it in a public, commercial display would cause confusion as to who was actually marketing the product and thus making a profit off of its use. However, because the Swastika has such strong social ties outside of Maynard’s potential to use it as a marketing device, many people don’t interpret it as a commercial logo and so do not associate it strongly with any given company as opposed to a group of socially like-minded individuals who are not necessarily out to profit financially by its use; rather, they use it as a symbol of their group’s ideals, and so – as a political device – it isn’t effectively marketed for commercial use by one business entity or affected very much at all by trademark laws.